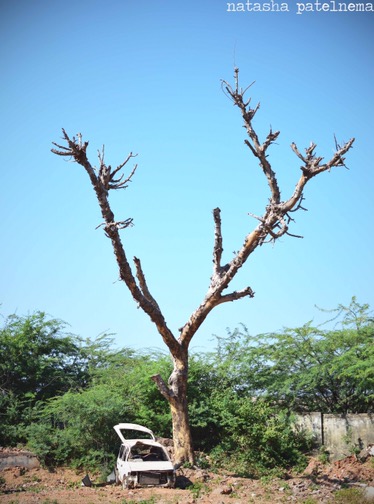 I was writing another update but last night an image of a photograph I had clicked earlier kept on flashing in my dream. As if a slideshow was going on but only the same image over and over again. It flashed in colour. But the sound and other images were of an Igmar Bergman movie I had seen many months ago.

Man! this person Mr. Bergman whome I consider The Harvard of film making, has influenced me so deep and is still influening me everyday. I feel blessed!

Next day I saw this image to understand what relation it had to “the hour of the wolf.”?

In the hour of the wolf the husband had become schizophrenic and hallucinating, but his wife was standing by him thinking she was helping him but actually she was destroying herself and encouraging him with his illusions.

Then I got the connection with this image. When  I saw this image I thought maybe the tree got infected with the wrecked car and thus it is also dying. Its as if the tree is asking to the heavens a big question why?

Another interpretation of the image can also be as if adverse force in form of lighting stuck both the car and the tree and this is what was remained of them. Taking aways its soul. This image looks empty just as death had just passed by.

When I converted the image into black & white, I kept the same grey tones as Mr. Bergman’s movies and it does look like a black drop of one of his films, probably similiar to the movie “Shame“as it was a war movie where the whole city was destroyed.


I know this is not according to the theme of my blog, but it also gave me a new outlook on negative   forces.  Adverse forces will always come to us in different forms,try their   mischief , want to leave us like this image only if we welcome them but if we throw them away, saying to ourselves “No this is not what I want to become, this is not me” they will not find a home in us and will be thrown out of the stadium far far away like a lost ball that shall never be found.

Also stances of a peom that relate to this image

“Such agony rends me as the tree must feel

When it is sundered and must lose its life.

Awhile let me lay my head upon thy lap

And gaurd me with thy hand from evil fate:

Perhaps because though touchest, death may pass.”