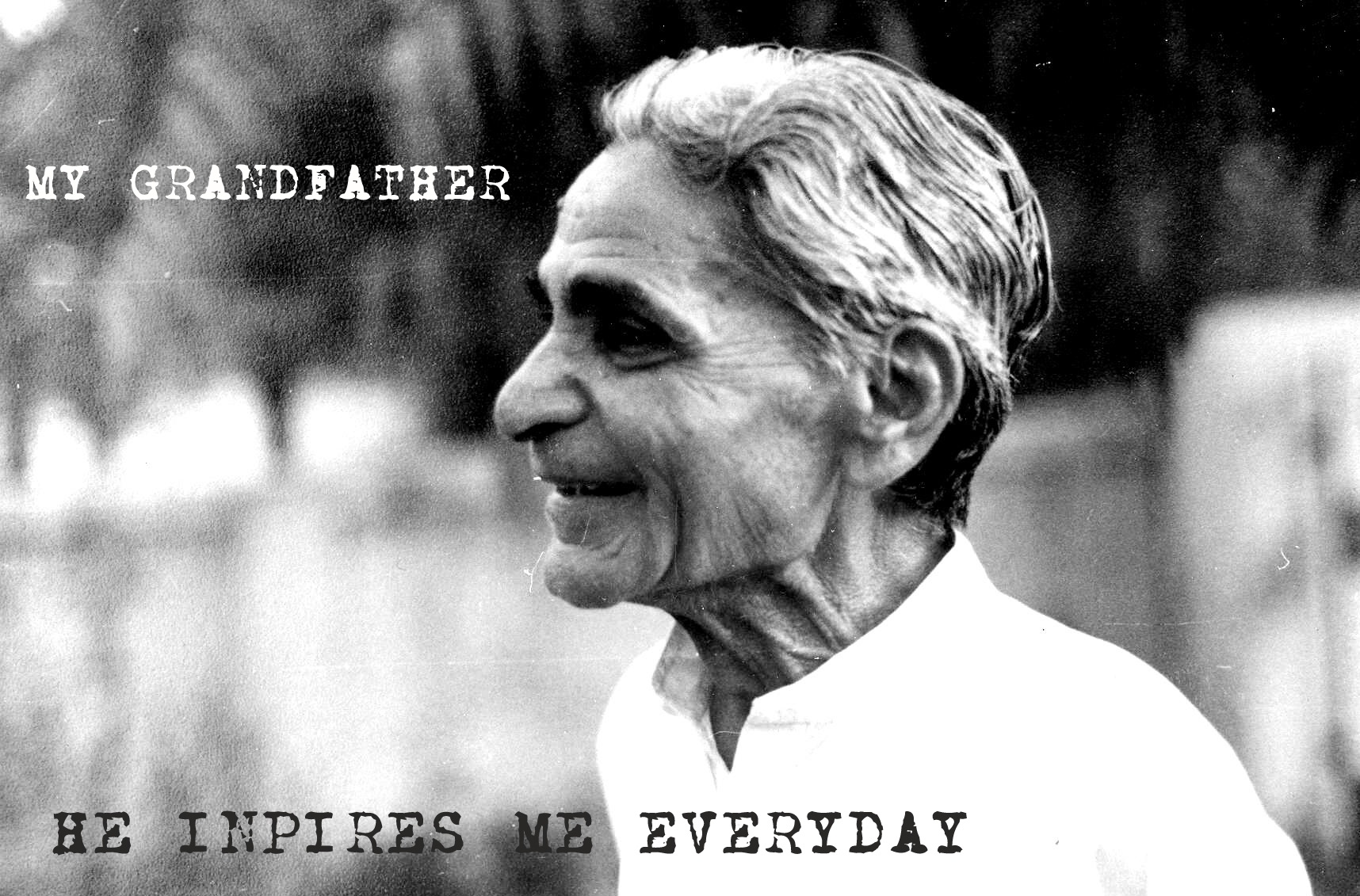 3 days back  it was my grandfather Pannalal Patel’s birthday. He died when I was in the fourth grade, I did not realise  then that he was gone but today I miss him so much, so many questions I want to ask him, I want to listen to his stories from him sitting with him over a cup of coffee…I do regret now that I could not sit with him and have conversations.

I needed to connect to him. My first connection with him is my mother who tells me stories of how he was in person…how he use to spread love where ever he went, how he was an extremely content and a secure person and nothing in the outside world bothered him.

My second connection was when I started reading his Autobiography “Jeevan Sanjeevani “, I feel in love with Gattu ( his childhood name), I felt he was sitting next to me and narrating me his experiences, I could visualise his life, I felt that I had time travelled and went back to my roots from where part of my existence comes from.

I could feel his happiness, his love, his pain. He had been through so much in his life, so many uncertainities so many adventures.

He had no memory of his father as he died early, his whole world was his unconditionally loving mother, whome he lost at an early age of 10 years. The rest of his life he was an ophant with no one to look after him he was at the mercy of his teacher. He got to study till 6 grade as someone sponsored him, when his loan got over he was forced to give up his studies.He lost his very close childhood friend someone who cared for him till his youth as she died,  then his life was full of experiences of travelling making close friends. He experienced loyalties as well as betrayals.

At the age of 24 he started writing. No wonder he was a great writer, he was a very sensitive person as well as a balanced person thus he could understand human behaviour very well. Plus he travelled extensively, he had lots of stories to tell…

Then came his marriage to my grand mother who was almost 11 years younger to him. It was during this time he started getting famous. Then his battle with tuberculoses, doctors had given up on him but he miraculously came out of it and finally children and my more novels….

He inspires me every day with his positivity as everyone remembers him as the most loving and happy person , he inspires me with his creativity, frankness and sensetivity.

When I read his autobiography the first thing I thought was he is so pure and honest, he is so true to what he is writing, so many instances he was even admitted his weakness or mistakes….it take guts…plus he is a very broadminded person as his stories were ahead of times.

For me it’s unbelievable that he was a 6 th grade pass out who has written books that are used as text books for Masters studies. Its a great achievement  though he was nit formally educated which he longed for, he was hounered  with ” gyanpith” award one of the highest honour in literature by the president of India. I am so lucky to be his blood, it give me a lot of courage to do many things 🙂

Before my pregnancy my teacher, Srikant Rakhe suggested me to do a photography documentary on my grandfather’s life as a project. Honestly that time I had nothing else on my mind so I reluctantly agreed as I could not see its end use.

I kept stalling the project as I was just feeling lazy to do the research, finally my teacher got annoyed so I decided to start. In the beginning I was looking for shortcuts, I thought I should be done with the project in 2-3 months. I went to meet my uncle( my grandfather’s youngest son).  I went with a small pad and pen and impatiently asked my uncle to give all the information about him, my uncle told me I needed to read the autobiography. In my mind I was thinking ” no way!! 7 books and that also in Gujarati, a language I was almost failing in school, I m not going to read them.” I told my uncle ” yes I will read” but pls help me with basic info, so he did tell me the basic information again my uncle insisted ” you  will find all your answers in those 7 books” . I had no intention to read them.

When I retured home and looked atthe pad  and it’s notes, with such less info I could click around 10 photographs. That did not make any sense. The project looked so juvenile, it looked like a school project absolutely unfinished. I kept on thinking ways to avoid reading those 7 books. Then a voice inside tole me that being Pannalal Patel’s granddaughter it was my duty to do the project right or not to do it at all, thus fighting with my self I decided to read his autobiograph books.

Once I decided I immediately drove to my parents place asked my mother for the books. All she told me was to be careful with them as each book had a message written by my grandfather for her.

Once home,  I immediately started reading the first book. Wow! They were so gripping I felt like my dada was alive and in front of me narrating his expreiences to me, I felt that he had written those books only for me, I felt so close to him, I formed a new connection with my departed grandfather. It took me 4 months to finish his 7 books. I would take the book wherever I would go, after reading those books I got in touch with my roots, my blood, why I am the person I m today, I felt so blessed and proud to be a part of him.

I felt so inspired…I still can’t get over those books…my grand father did not write about his later years and when the last book got over I felt like asking him ” why dada? Why did u not write more about your life?”

After reading the books I got under a spell of Pannalal, I was super excited to start the photography project. Soon the travelling started. One of my travels I visited my grandfathers native village Mandli with my uncle, where he was born and spend many years of his life there. We stayed in my grandfather’s old house which is deserted now. We put beds outside in the porch I  feel asleep listening to songs on my ipad where i could imagine my young dada and his incidents. In the night I was was woken up by mice fighting right above where I was sleeping…but I made it through the night. My husband had his doubts that I would not manage staying in  the village in peak Indian summers..I told him ” dont worry I am carrying my pilow, energy drinks and instant noodles” …But the truth was that my grandfather’s books were so inspiring that I was strongly  motivated to hang in and enjoy the experience 🙂

In this post I am sharing images of the village and my grandfathers old house. Since I felt I had time traveled I have converted the images into black and white so the images look like 1930’s. Except for the electricity wires the images do take me back in old days.

14 thoughts on “BACK IN TIME TO CONNECT TO MY ROOTS”